New York Elegy
(August 14, 2019)
I am the city. I set out at dawn, from the southernmost tip of Manhattan. Wearing an orange worker’s/prisoner’s jumpsuit, I walked the 32-mile perimeter of the city while holding an iPhone with the camera trained at the tops of my feet. The result is nearly fifteen hours of footage, edited into an endless loop in which the viewer sees not skyscrapers or yellow cabs, or other iconic images associated with New York. What they see are disembodied orange legs and cracked black leather shoes surrounded by pavement or dirt. New York Elegy is one long monotonous march not through the heart but on the margins of the city that never sleeps. HOME IS WHERE THE HEART IS
(June 2017)
I am a homemaker. Using scent and imagination to conjure memories and associations, “Home Is Where the Heart Is” invites two strangers to share a “home,” while exploring together the boundaries of the Norwegian national “home.” Created and staged as part of “Hardbakka Ruins: The Caring Economy” in Bergen, Norway. 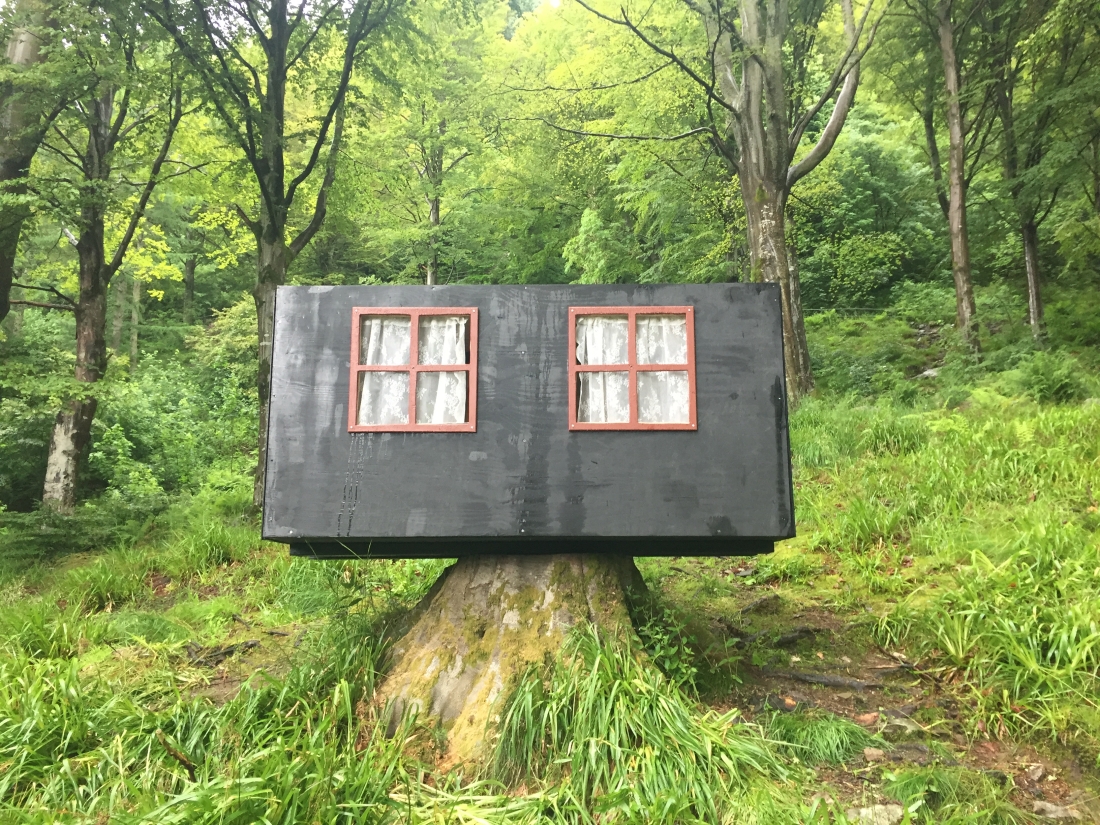 4.5 HOURS
(April 1, 2017, 8:15 A.M. to 12:45 P.M.)
I am a domestic servant. The title of this piece refers to the average amount of hours women worldwide spend performing unpaid domestic labor per day. On the former grounds of the Tempelhof Airport in Berlin, I swept up a pile of dirt on a rug, gathered it in a dustpan, put it back into a bucket, and then threw it out again onto the rug. Then I started all over. And continued the housecleaning ritual for 4.5 hours, making public the labor that is normally performed in private. 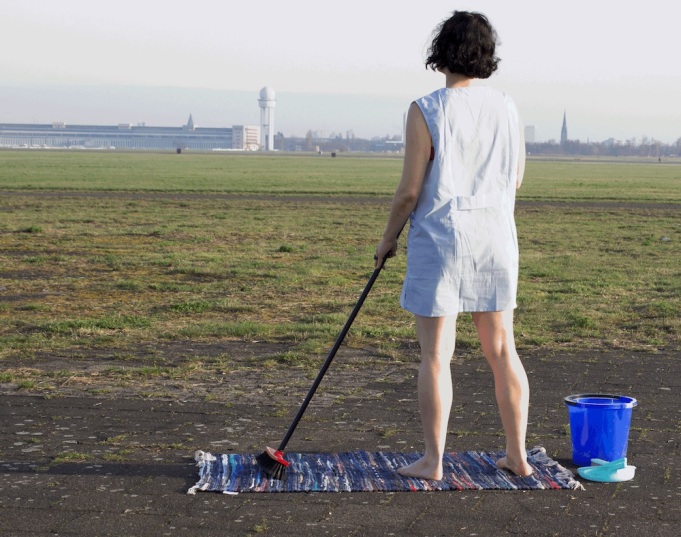 ONE OF THEM IS MINE
(2009-ongoing)
I am a collector. I collect lost buttons, parted from their hapless owners and abandoned in the gutters, sidewalks, cracks and crevices of cities around the world: New York, Beijing, Venice, Berlin, Rome, Los Angeles, Brussels, Bologna, Florence, Amsterdam, Utrecht, Bergen, Munich, Bayreuth, Stuttgart, Reykjavik, Turin, Plymouth, Salt Lake City, Stockholm. I mount each of the over 1200 buttons, on its own, 2 x 2, canvas. 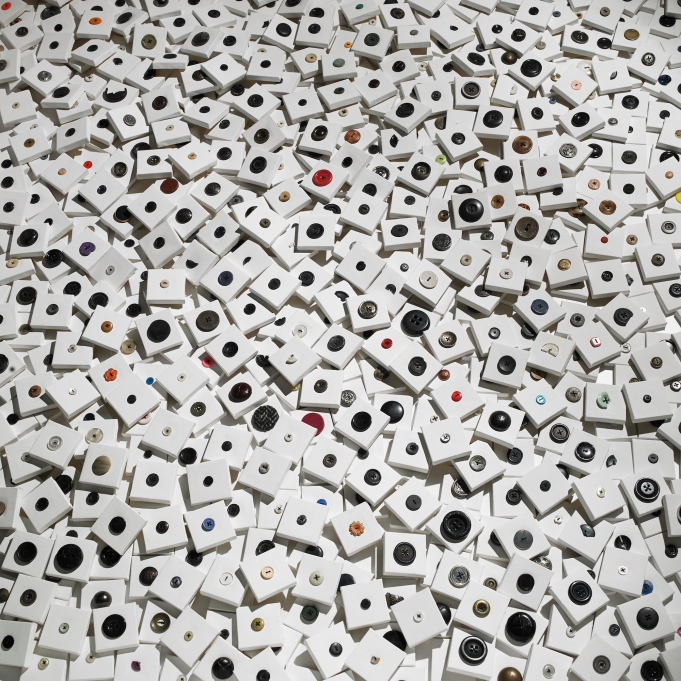 HAPPY BOMB
(May 2013)
I am a professional. I am an American. I am as disciplined at work, as I am at leisure. In this piece, I performed an Olympic-distance triathlon, alone, in the enclosed space of a gym: in a 50-meter pool, on a stationary bike, and on a treadmill. Documented with selfies, I created my own shirt and awarded myself a medal.

EASY JET
(2013)
I am a tourist. I belong to an army of dancing leisure travelers, a chorus line of pleasure seekers. Though seemingly similar, no two leotards are alike. I added hand-stitched appliqués of the Boeing 747, based on my own renderings of the “Tourist Jet,” to the mass-manufactured leotards made by anonymous factory workers in China. 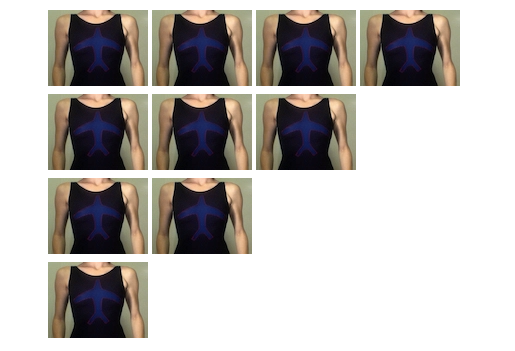 THE NEW, NEW AUSTERITY
(2009-ongoing)
I am the new worker. I am superfluous. This project began in the aftermath of the Great Recession and consequent embrace of a new model of labor, one that requires perpetual self-reinvention and flexibility. For it, I take objects either found or acquired second hand and repurpose them, making them useful, temporarily. Empty salsa jars become coffee-to-go mugs become pencil holders become bed pans; sheets and tablecloths become sundresses become lunch bags become dish rags become menstrual pads, and so on until the objects have lost all utility. 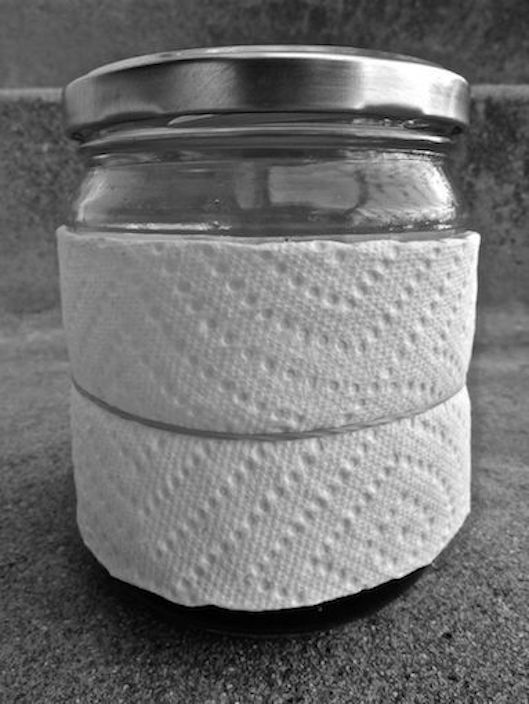 THE SHAKERS: DECODING AN IDENTITY
MacLachlan Museum of Woodworking
(May – August 31st, 2016)

I am a curator. Sort of. Working as an assistant (intern) to the curator at the Hancock Shaker Village in Pittsfield, Massachusetts, I proposed the theme for this exhibition, conducted research for it, and wrote the wall text. 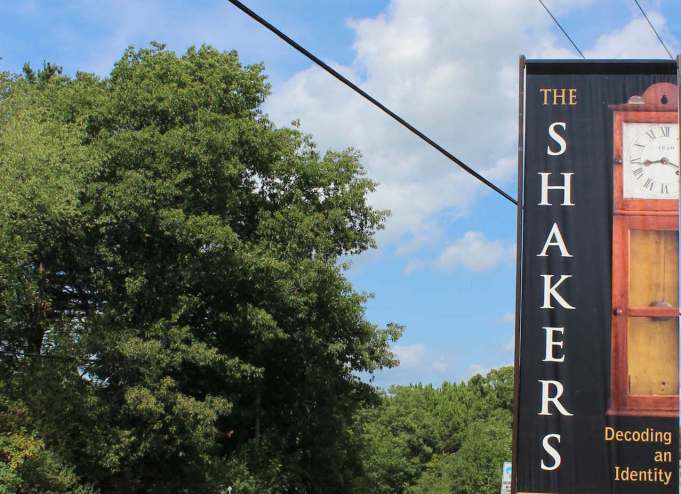